There have been speculations that Spanish champions Barcelona want to add Funes Mori to their squad ahead of the coming campaign but the club’s chief has confirmed that the club will not sign the player this summer. 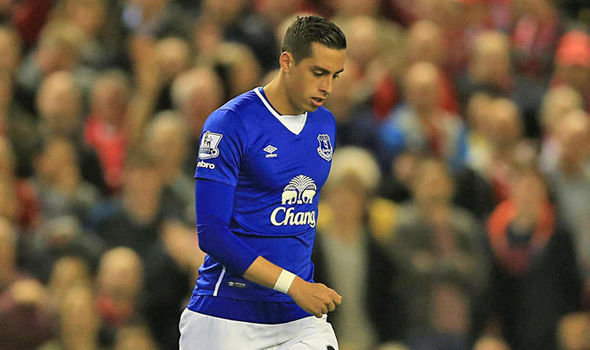 Barcelona sporting director Robert Fernandez said the club will be tracking the progress of the player but will not bid for him to join them just yet.

Scouts from the Liga champions were watching the player when he was in action for Argentina against Venezuela in the Copa America quarter-finals, leading to reports that an offer could be made this summer. The Barcelona chief confirmed that he would keep an eye on the player on his form but quashed talk of a deal in the current transfer window for the 25-year-old. Fernandez told Sport:
<--more-->
“He’s a good player and we’ve known him well for a long time, but we’re not going to sign him this summer,” the director said effectively all speculations. Funes Mori played a brilliant debut season for Everton in the last campaign. He made 28 Premier League appearances Goodison Park and scored four goals.

On the other hand, the club is reported to be having issues with Neymar, according to reports from Spanish paper ABC. The report mentioned that Neymar’s agent and his father wants the star player to leave Barcelona in light of all the transfer troubles since he joined the club. They want him to sign for Real Madrid and start on a clean slate. If Real Madrid wants to sign the player, they would need to meet the release clause for the player which is €190 million. Another clubs interested is French champions Paris Saint-Germain.

There are other reports that the star player could sign an extension with the Catalan giants as Real Madrid are not in a hurry to sign him, given the alternatives they have. Alvaro Morata and Paul Pogba are still heavily linked with the club.